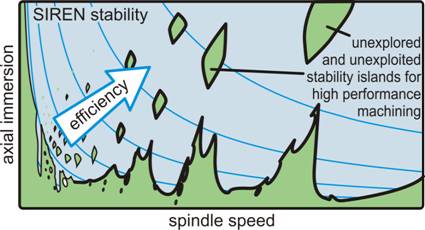 Cutting went through a revolution in the 1990s when high-speed milling (HSM) was introduced: the sculpture-like work-pieces produced with high precision and efficiency resulted in one order of magnitude less parts in cars/aircrafts, which kept this traditional technology competitive at the turn of the century. This has been followed by an incremental development when not just the cutting speeds, but depths of cut and feed rates are pushed to limits, too. The limits are where harmful vibrations occur. Cutting is subject to a special one called chatter, which is originated in a time delay: the cutting edge interferes with its own past oscillation recorded on the wavy surface cut of the work-piece. In 1907, the 3rd president of ASME, Taylor wrote: ''Chatter is the most obscure and delicate of all problems facing the machinist''. In spite of the development of the theory of delay-differential equations and nonlinear dynamics, Taylor's statement remained valid 100 years later when HSM appeared together with a new kind of chatter. The applicant has been among those leading researchers who predicted these phenomena; the experimental/numerical techniques developed in his group are widely used to find parameters, e.g. where milling tools with serrated edges and/or with varying helix angles are advantageous. The SIREN project aims to find isolated parameter islands with 3-5 times increased cutting efficiency. The work-packages correspond to points of high risk: (1) validated, delay-based nonlinear modelling of the dynamic contact problem between chip and tool; (2) fixation of the tool that is compatible with a dynamically reliable mathematical model of the contact between tool and tool-holder; (3) up-to-date dynamic modelling of the spindle and bearings at varying speeds. High risk originates in the attempt of using distributed delay models, but high gain is expected with robust use of parameter islands where technology reaches a breakthrough in cutting efficiency for the 21 st century.